For the first time in ten years, coho were observed April 21 during a snorkel survey in Green Gulch Creek. Shoved over to the side of the valley, lined with concrete, and pinned in place with a series of small dams, this lowest tributary to Redwood Creek has long been considered utterly inhospitable to coho salmon. When one pair spawned in a rubble dam during the 2004/2005 winter, the residents of the Green Gulch Farm Zen Center in Muir Beach were inspired to take on restoration of the creek. With support from the California Department of Fish and Game, NOAA Fisheries, the Natural Resources Agency, NRCS, Marin Community Foundation, Patagonia, hard-working volunteers, and many generous donations, Green Gulch Farm worked with PCI to design and implement the first phases of restoration. In 2013 and 2014, the farm road was moved away from the channel, a new bridge installed, and a former farm field replaced with a 750-foot long reach of natural, meandering channel and wetland/riparian habitat. http://www.marinij.com/general-news/20141013/green-gulch-creek-recreated-to-help-endangered-fish

In 2015, Spring Valley Creek, a tributary to Green Gulch that had been piped into an in-channel dam, was re-connected downstream so that coarse sediment and cool summer water could return to the newly-created habitat. Green Gulch Farm and PCI are currently looking for funding to design and implement water conservation and rainwater storage projects as the next restoration phase.

And it’s working! This winter’s storms brought some perfectly-sized coarse material down Spring Valley Creek and into the main channel. Even better, PCI biologist Jennifer Michaud saw two young-of-the-year coho in the restored meander reach during her spring survey.

See if you can spot the coho in the algae! 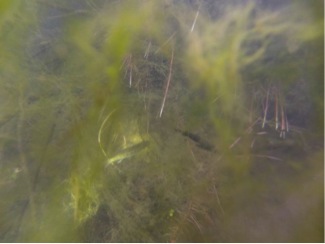 For more about the project, see http://pcz.com/project/green-gulch-enhancement-project/

This entry was posted in News.