Climate.gov also provides lots of other interesting information, from stories about climate adaptation to tons of maps and datasets to resources for teaching about climate.

PCI has been hard at work this summer on the Mill Creek fish passage project. Working with Trout Unlimited, we are restoring access for coho and steelhead to 11 miles of high quality upstream habitat. 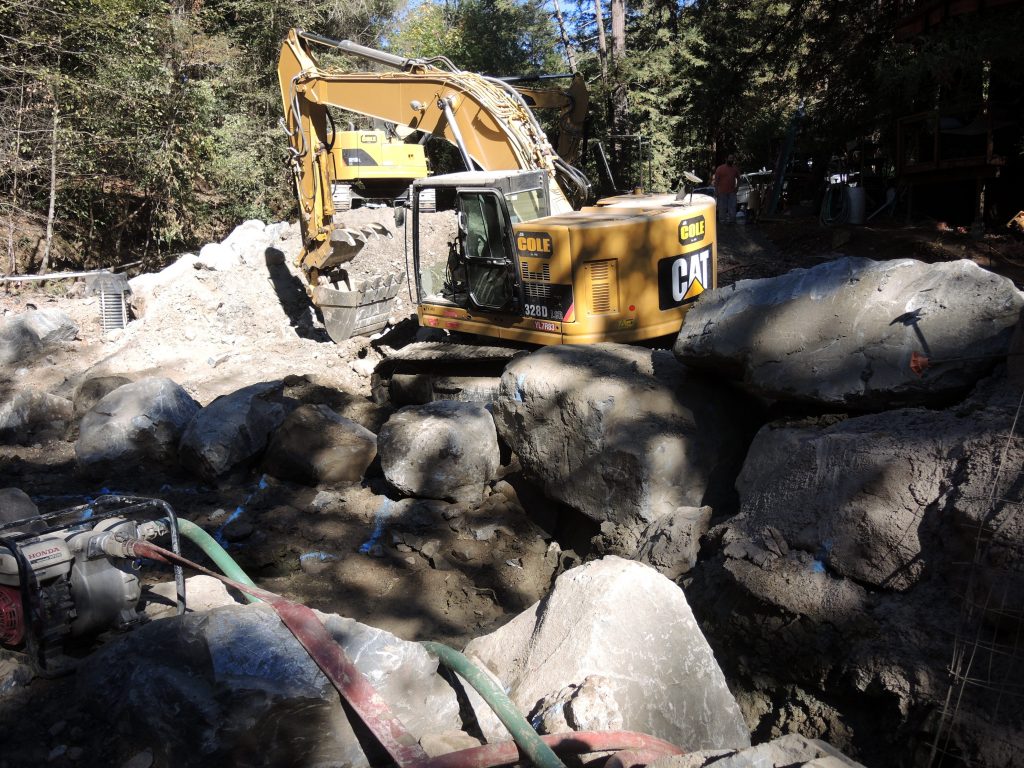 PCIers on the Mill Creek site

After many years of planning, Jenner Headlands, the spectacular property on the Sonoma Coast purchased in 2009 by a coalition of private and public partners, is almost ready for open public access.

PCI was retained by the Wildlands Conservancy, which now owns and manages the 5,630 acre preserve, to develop public access off of Highway 1. Construction of a safe turnout, 30-space parking area, day use area with restrooms, and over 700 feet of wheelchair-accessible trail is planned to begin this year as soon as the Wildlands Conservancy secures the necessary funding,

PCI’s team was proud to add our special touch with bioswales, a restored drainage, sensitivity to how all of the elements fit into the landscape, and a commitment to easy and meaningful access for everyone. As PCI’s project manager and lead designer Maggie Jenson said, “I have loved working on this project because it’s not just about the function of the parking lot. It’s about the aesthetics, and it’s also about the ecological value. … The ultimate result is we’ve created something that is an enhancement to the environment.”

For the first time in ten years, coho were observed April 21 during a snorkel survey in Green Gulch Creek. Shoved over to the side of the valley, lined with concrete, and pinned in place with a series of small dams, this lowest tributary to Redwood Creek has long been considered utterly inhospitable to coho salmon. When one pair spawned in a rubble dam during the 2004/2005 winter, the residents of the Green Gulch Farm Zen Center in Muir Beach were inspired to take on restoration of the creek. With support from the California Department of Fish and Game, NOAA Fisheries, the Natural Resources Agency, NRCS, Marin Community Foundation, Patagonia, hard-working volunteers, and many generous donations, Green Gulch Farm worked with PCI to design and implement the first phases of restoration. In 2013 and 2014, the farm road was moved away from the channel, a new bridge installed, and a former farm field replaced with a 750-foot long reach of natural, meandering channel and wetland/riparian habitat. http://www.marinij.com/general-news/20141013/green-gulch-creek-recreated-to-help-endangered-fish

In 2015, Spring Valley Creek, a tributary to Green Gulch that had been piped into an in-channel dam, was re-connected downstream so that coarse sediment and cool summer water could return to the newly-created habitat. Green Gulch Farm and PCI are currently looking for funding to design and implement water conservation and rainwater storage projects as the next restoration phase.

And it’s working! This winter’s storms brought some perfectly-sized coarse material down Spring Valley Creek and into the main channel. Even better, PCI biologist Jennifer Michaud saw two young-of-the-year coho in the restored meander reach during her spring survey.

See if you can spot the coho in the algae!

For more about the project, see http://pcz.com/project/green-gulch-enhancement-project/

The California Environmental Quality Act (CEQA) allows for the preparation of programmatic environmental impact reports (EIRs) and mitigated negative declarations (MNDs) when a project includes a series of related actions that can be characterized as one large project. Programmatic analyses are often used for activities that are linked geographically or when an agency wants to evaluate rules or requirements that guide how a program must operate. The programmatic approach works especially well when the program’s individual activities have generally similar environmental effects that can be mitigated in similar ways. The benefits of such documents are that they allow a comprehensive examination of a project and promote “tiering” when later activities within the program are undertaken. The use of tiering can expedite environmental review by eliminating repetitive analysis of issues and potential impacts adequately addressed in the program EIR or MND.

The Sonoma Resource Conservation District Board of Directors recently adopted an MND for their Sonoma County LandSmart© Program On-the-Ground. PCI worked with District staff to develop a program-level document that will allow specific projects to be implemented without further CEQA review.

Projects implemented under the LandSmart© Program will be small-scale, consisting primarily of stabilization of eroding streambanks, development of stable stream crossings, improvements to access roads and decommissioning of unused roadways, installation of pipelines and diversions to move water to stable areas for discharge, establishment of vegetative cover, and invasive species control. The District will evaluate individual LandSmart© projects using an Environmental Review Checklist to determine if impacts were adequately addressed in the program document and to identify Best Management Practices and mitigation measures required at an individual project location. Individual projects that do not conform to the program requirements will require additional analyses; however, projects that meet the LandSmart© program requirements are cleared for implementation. The programmatic MND will save the Sonoma Resource Conservation District both time and money while paving the way for positive changes for water quality and wildlife habitat.